The ancient, unique therapy uses hops, yeast, and other natural ingredients to create one of a kind recipes that mimic Beer Bernard. No wonder beer baths have so many health benefits!

Beer spas first became popular in the Middle Ages. The ancient, unique therapy uses hops, yeast, and other natural ingredients to create one of a kind recipes that mimic Beer Bernard. No wonder beer baths have so many health benefits! The main difference is that barley isn’t added to the beer bath, to eliminate the possibility of allergic reactions. The beer spa experience also includes unlimited drinks of unpasteurized beer Bernard® throughout the entire time. The combination will leave you feeling revitalized as well as healthy and relaxed. 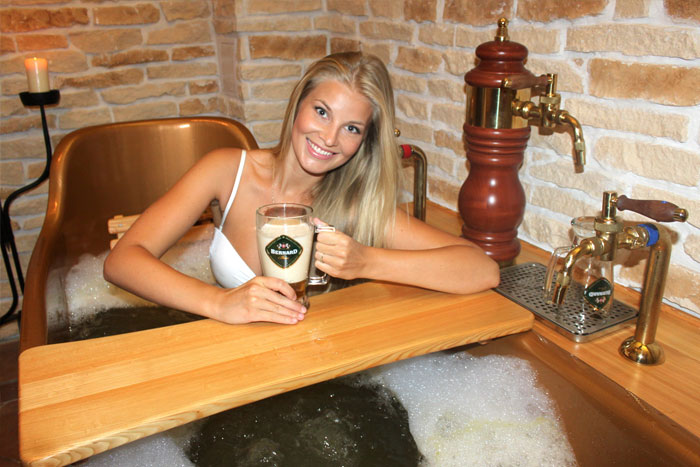 Spa has been operated as such before four thousand years ago in India. The beneficial effects of the spa on the human body were already known by the ancient Chinese and Egyptians. The history of beer dates back to the 7th century BC, when the beer, apparently accidentally, was discovered by ancient Sumerians. Cultivated corn was poorly stored and the principle of fermentation was invented. The combination of beer and spa is officially known from the Middle Ages, when the knowledge about the beneficial effects of bathing in beer was found from the sources. During this time, they discovered the preventive effects of beer and beer spa baths.

The beer spa experience consists of two parts. First parts is soaking in a private Beer Bath for two while drinking UNLIMITED beer Bernard. Then they’re invited to relax and of course enjoy more beer. The experience takes about one hour all together. There is an option of beer massages as part of their package should expect to spend an hour and half at the spa.

Beer baths are a proven medical procedure from the Middle Ages, known to cleanse the pores, increase pulmonary circulation, regenerate skin and hair and revitalize the nervous system. It’s necessary to keep the correct temperature, time of the bath, and right dosage of ingredients to ensure maximum health benefits. The bathing experience takes place in special tubs designed for the Beer Spa. This allows bathers to experience the greatest absorption of healing properties.

For the best results, bathers shouldn’t shower within 12 hours of the experience. It’s recommended that those with healthy immune systems repeat the procedure once a month, if not more often.

Every visitor gets an original bottle of Beer Bernard® with the historical seal and certificate of completion.

For questions or assistance with reservations, please contact us

Beer spa Bernard in the center of Prague

info@pivnilaznebernard.cz
we respond quickly, however always within 24 hours